The AR-XA turntable belt replacement is designed for higher torque, smooth rotational speed, and reduced resonance transmissions into the platter.

If you are unsure if this is the correct belt, please use our free belt matching service here

For upgrades and enhancements to sound quality and fidelity please refer to the Related Products below.

Great replacement belt. Brought an old turntable back to life. 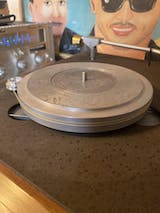 Not yet received. Be patient. It has to travel a long way.

This is a good quality belt but it is noticeably tighter and stronger than the two original belts I have, even allowing for their age. I read that Villchur took particular pains with the belt, so I think it is reasonable to be concerned about the differences.

I have ordered replacement belts for this turntable from other reputable sources with the same result -- and possibly the same belt. I suspect it is a metric belt that is considered a close match, not a replication of the original, inch-dimensioned belt.

I have no way to test whether the replacement belt holds the same performance specs as the original. The music sounds good, with perhaps a bit better bass and attack definition than my original belts, which are now some 50 years old. I am going to use this new belt for a while and hope that it does not stress the motor bearings.

Thanks for your fast service and the product is great, too.

I don't know what you receive my previous email. But the needle was broke off the stylus. Beside the point it didn't fit anyway. So is what I need is a stylus and a cartridge that is compatible with my turntable. Thank you look forward to hearing back from you

It met all expectations.

I now have better than twenty hours of listening with my new Jico V-15 Type Three HE from LP Tunes. I say “ three cheers”, for Jico’s V-15 Type Three. It sounded excellent from the start, and has continuously improved with play. Used first with a Dual 1229, then a Technics SL-5350, it provides strong bass, pleasing midrange and detailed treble. Better than my original Shure from 1974? Yes. In my opinion, it is definitely a worthy upgrade. If you’re fence sitting, I recommend you take the plunge.
SM in Florida